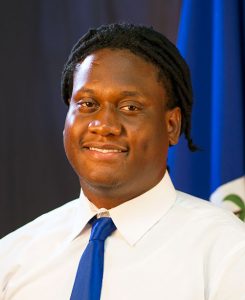 Micah Goodin was born on Dean Street but was raised in the heart of Majestic Alley. In 2011 he graduated as valedictorian of Sadie Vernon Technical High School and secured a scholarship at St. John’s College Junior College where he completed an Associate’s Degree in Criminal Justice and earned another scholarship in Criminal Justice at Galen University.

While in sixth form he teamed with other student leaders and launched the Nation Builders National Youth Movement through which they lobbied on behalf of young people on issues ranging from access to education to meaningful employment.

After he left SJCJC he was elected as Chief of Staff of the Belize Youth Movement, the youth arm of the PUP and was later employed by the Amandala press where he currently works as a journalist.

Micah believes that young people must be included in how they are governed. The youth must no longer be an invisible majority…They are here now and must play a role in making the country better.